When I was asked to research and write about this topic, I was sceptical of how much involvement IT has in the food sector in Ireland. It is only after I began finding numerous journal articles and webpage’s on the topic that I really became interested in it. Just within Ireland there are many IT technologies currently in development and in use in the food sector, ranging from monitoring fish supplies to identifying cattle.

Wikipedia defines a blog as “a type of website, usually maintained by an individual”. A kind of personal journal which you can update and edit with your own opinions. As I am new to the whole blogging thing, that is exactly what I am going to do. What follows is my descriptive view on the technologies which I discovered during my research and my general thoughts on the topic. To try organize this post better, I will try to give my explanation under the “So basically” headings.

Similarly to my report on this topic, I am starting with RF-IDs (Radio-frequency identification). I was surprised to find that I had never heard of this before this assignment, considering that its total worldwide market expected to be worth $9.7 billion by 2013. One definition which I found during research sums it up in a sentence, “RFID allows automated identification of products by embedding chips with wireless antennas on objects.” (Indranil, Ngai, Teo, & Spiekermann, 2009). This technology is not just being used in the food distribution and traceability either. It has been introduced into the medical, manufacturing and retail fields also.

RFID’s comprise of 3 main parts, a chip, a reader, and a receiver. The chip is usually contained in tag which is affixed to the animal (for example, and ear tag for cattle or sheep). These chips have no power source so a reader is required to create an electromagnetic field to active the chips. These are known as passive RF-IDs. A receiver then picks up the data transmitted by the reader, as shown in the image below. This data can then be recorded into a database.

I can understand why this technology has been adapted so quickly into modern industries. It is implemented at a very low cost and is the cheapest option required by law at this point in time. But of course, it is not without its cons, or should I say con. The lack of dependability has been the crippling fault behind RFID since day one, and they have yet to iron out this kink. RFID is over 50 years old and although development is ongoing, I can see it being overtaken by future technologies. I will expand on this later in some of the other technologies that I will cover.

Moving on I would like to look at retinal imaging, as it introduction into livestock traceability has only taken place in the past few years. Its success in other areas began people thinking; Why not use it instead of RFID or ear tags to trace livestock? It is easier to manage while at the same time being far more reliable than RFID.

This method is based around reading retinal vascular patterns or RVP’s. This is a unique pattern which the blood vessels in your eye form. It has been proven that “the patterns of RVPs are stable from birth and unchanging over an animal’s life” (Golden, Allen, Taylor, Patterson, & Skuce, 2008) Companies such as Optibrand have adopted this into a sell-able product. Their device (the Optireader™) is a data logger, digital video camera, and GPS receiver all in one. Once the Image of the livestock’s eye is captured, it will be encrypted and saved to a blob file along with a log of the location at which they are taken by means of the GPS receiver. This blob file can then be uploaded, stored, and analyzed. It can also be called back giving you a rating on the uniqueness of the image by passing it through an algorithm (Golden, Allen, Taylor, Patterson, & Skuce, 2008)

I believe that this is a big step forward in food traceability worldwide. It is currently expensive to implement but with further development I can see it being introduced into government legislation as a must have for farmers/producers. It’s amazing how far technology has come.

The final technology which caught my eye was wireless sensors. I found this to be particularly interesting, and not just because it is an Irish example. As we all know, or at least those of us in the fishing industry in Ireland, there is global protest against overfishing. Not to mention the legislation against it continuously being introduced. It is vital that fisheries begin using IT systems to manage their fishing habits. Of course Ireland being an Island, and having a large demand for fish produce, It is at the front of technologies in there development stages. It’s kind of exciting!

Once again let me explain how this is meant to work.

The system itself is quite simple and can be broken down into 2 levels. Level one comprises of loggers which contain a thermostat and an RF transmitter, and a base station which receives the transmitted data. Level two introduces a GSM modem that communicates the data to a server on shore which stored it in a database. Both the database and controlling software are web based which allows them to be queried or altered from any device connected to the internet. This is illustrated below. (Crowley, Frisby, Edwards, Murphy, Roantree, & Diamond, 2004). 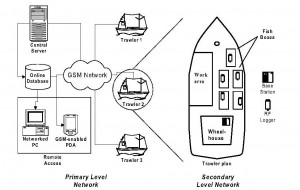 So far there has been nothing but positive results. Areas being over fished can easily be identified. As with most cases, cost will be a large decider in whether or not this technology will succeed or fail on a commercial level. If the project can be revised to the point where it may be considered into government legislation on fishing, then I believe it will become a common element of fishing practice in Ireland and abroad.

There are many more technologies out there, but I simply don’t have the space here to go through them all. I hope that you find this post interesting and informative. Googling anything I have described will turn up good results, but just in case, here are some useful links if you wish to read further into what I have discussed.

Please feel free to email me or comment on this post with any questions.
Thanks for reading.
Dan.

– Here is my short summary of the Blog creation/writing process: Short summary

Traceability and Information Technology in the Meat Supply Chain

A framework for beef traceability from farm to slaughter using global standards: An Irish perspective

Buhr, B. (2003). Traceability and information technology in the meat supply chain: Implications for Firm Organization and Market Structure. Journal of Food Distribution Research .